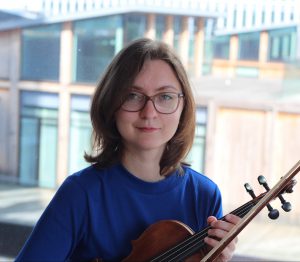 Victoria van Kan is a violinist and a violin teacher. She represents both the Russian and European violin school. Since early childhood she performed in various concert halls in Moscow and later in the Netherlands, among which Rachmaninov Hall and Big Hall of Moscow Conservatory, Central house of composers (Moscow), Central house of Artists (Moscow), De Doelen Concert Hall (Rotterdam), Concertgebouw (Amsterdam), Grachtenfestival etc. both solo and in ensembles.

Currently she is a member of Zeeuwse orkest and the founder and the teacher at Viool Studio Rotterdam.

Violin is one of the few instruments that resembles a lot with a human voice. It can be and melodic, and articulative, and rhythmical and singing. Learning violin engages and stimulates hearing, coordination, imagination. That’s why regular lessons include:

My aim is to help you to become a confident musician, who has all the tools to reach own goals and potential.